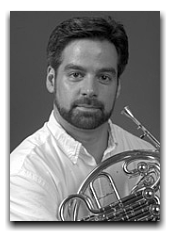 David Brockett, Adjunct Professor of French Horn, served as Acting 3rd Horn of the Utah Symphony for the 2006-07 and 2007-08 seasons. During the two previous seasons he played 2nd Horn with The Cleveland Orchestra; over the past two decades he has spent four full seasons and portions of many others with that orchestra, appearing in subscription concerts at Severance Hall and the Blossom Music Festival, playing on numerous recordings, and touring around the world. David was Acting Assistant Principal Horn of the Cincinnati Symphony Orchestra and Acting Principal Horn with the Cincinnati Pops for the 1990-91 season, and has also performed frequently with the Pittsburgh Symphony Orchestra, the Key West Symphony, the Wheeling Symphony Orchestra, the Erie Philharmonic, the Akron Symphony, the Blossom Festival Concert Band, the Detroit Concert Band, and as Featured Alto Horn Soloist with the Jack Daniel’s Silver Cornet Band. He has played in the orchestras of the Pittsburgh Opera, the Cleveland Opera and Ballet, the Cleveland Jazz Orchestra and the Cleveland Chamber Symphony.   David was a founding member of the Burning River Brass, with which he made four CDs and went on more than a dozen national tours. He also performed and toured with the Cleveland Chamber Brass in the 1990s, including a residency at the Odenwald Festspiele in Germany. He has taught at Penn State University, Baldwin-Wallace College, Kent State University, Cleveland State University, the University of Akron, the Oberlin Conservatory of Music, and the Cleveland Institute of Music. He arranges music for brass and has frequently conducted university and festival brass ensembles.  David has played on numerous radio, television, and film soundtracks, including Tom Selleck’s Last Stand at Saber River and several NBC television specials.  David Brockett was born in London, Ontario and grew up in the Detroit area. He earned a Bachelor of Music from the Cleveland Institute of Music and a Master of Music from the University of Akron. His principal teachers included Roy Waas, Richard Solis, Albert Schmitter, and Dale Clevenger.  David Brockett lives in Cleveland is married to soprano Adele Karam.