A new PhD in Physics (raised and nurtured at CSU) is born! 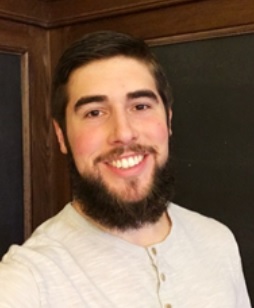 Philip M. Dee was born and raised in northeast Ohio. He attended Cleveland State University (CSU), attaining a B.S. in Physics (Honors) and a B.E. in Civil Engineering in 2013. Phil participated in undergraduate research with Prof. Kiril Streletzky on polarized light-scattering experiments and a semester thesis project with Professor James Lock on multiple scattering theories. He presented his work with Prof. Streletzky at several national conferences, including two APS March Meetings (Baltimore and Denver). He also contributed to a manuscript based on his polarized light-scattering research.

While at CSU, Phil was actively involved in campus-wide activities of the Society of Physics Students (SPS), including Physics Olympics, Physics Days, and Catapult Contests. He became a president of SPS chapter in 2013 and in his role initiated two very popular SPS events: annual SPS Physics Jeopardy event and several Physics of Rock and Roll SPS meetings. Phil also worked as a Teaching Assistant (TA) for the Physics Department quickly becoming a lead TA for PHY 241/2. Phil has also been selected as 2013 Physics Outstanding Senior.

After a year in the master’s program at CSU, Phil and his wife Hannah (B.S. Physics Honors 2014, CSU, Physics TA, undergraduate researcher, and SPS VP) left for Knoxville, where Phil began work toward a Ph.D. in physics at the University of Tennessee. In late 2016, he began research in the group of Professor Steve Johnston on models of superconductivity and electron-phonon coupling. Phil received two awards for teaching and was granted an SCGSR fellowship from the Department of Energy in fall 2018. He spent much of the latter part of his Ph.D. working with Thomas Maier, a distinguished research staff member at Oak Ridge National Lab. There he primarily focused on models of superconductivity in bilayer systems using cluster-embedded mean-field techniques. Phil is the first author or co-author of four peer-reviewed papers, with two more currently in preparation.

Phil successfully defended his Ph.D. dissertation titled "Numerical Studies of Superconductivity and Charge-Density-Waves: Progress on the 2D Holstein Model and a Superconductor-Metal Bilayer" on April 21st, 2021. His dissertation updates the current perspective on common theoretical models and approaches to the electron-phonon many-body problem as well as layered superconductors. Such systems have renewed interest in recent years due to exciting new experiments and state-of-the-art computing capabilities.

In early May, Phil began a two-year postdoctoral appointment with Professors Peter Hirschfeld and Richard Hennig at the University of Florida with a primary focus on discovering new superconductors using quantum many-body theory and machine learning-based approaches. Phil and Hannah are expecting their first child in late August of this year.

Please join us in congratulating Phil and Hannah on these two amazing achievements! Long Live Physics at CSU!