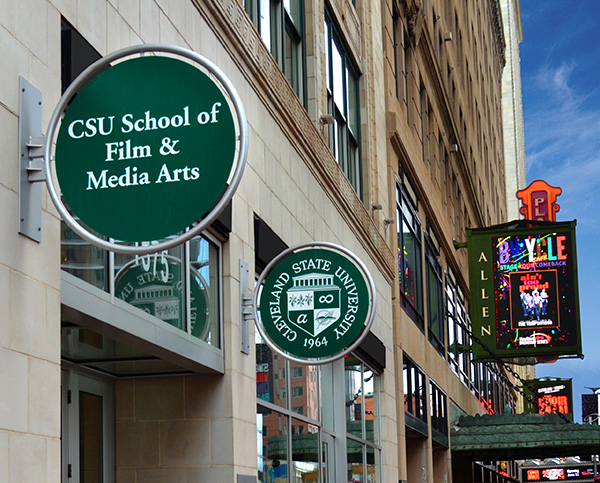 The School of Film & Media Arts has attracted a range of diverse faculty members and support staff who share a track record of industry accomplishments and significant teaching experience.

Anita Gabrosek, Assistant Professor in Post-Production, graduated from Ohio University with dual MFA’s in Film Production and Playwriting. She worked as a professional editor in New York for over a decade on narratives, documentaries and short-form television; some of her credits include the feature documentaries Cropsey and Borderline, and the television shows Impractical Jokers and MTV’s Made. In addition, she also worked at New Dramatists, one of the country’s leading playwriting centers. She has taught editing, documentary and writing courses at The Edit Center, The New School for Social Research, New York University, and most recently at Penn State where she received the Dean’s Excellence in Teaching award. Her own work includes the short film This May Pose A Continuing Threat (2019) and the full-length play Disengaged.

Assistant Professor of Practice Maria Gigante earned her Master of Fine Arts in Film from Columbia College Chicago. Her short films, including the award-winning Girls Room (2007), have screened at more than 60 festivals around the world, including Berlin International, Tribeca, Montreal World and Cannes. She was the runner up for the 2007 MTV Movie Award “Best Filmmaker on Campus” and was listed as one of the “Top 10 Emerging Talents in Chicago” by Boards Magazine in 2008. For more than a decade, Gigante has taught film courses at the college level while writing, directing and producing narrative film, documentaries, music videos and web content. She is the marketing and media hub manager for the Cleveland International Film Festival.

Evan Lieberman has a Master of Fine Arts in Screenwriting from the American Film Institute’s Center for Advanced Film and Television Studies and a PhD from Emory University’s Institute for the Liberal Arts in Film Studies/Cultural Studies. He has written, produced, directed, and/or served as director of photography on four feature films and dozens of shorts, commercials, music videos, and promotional videos. His publications span topics ranging from Mexican wrestling films to the conceptual dynamics of internet surfing with an emphasis on the history and theory of cinematography.

Interim Director Cigdem Slankard oversees operations, strategy and academic development for the school. Born and raised in Turkey, Slankard came to the United States to study film and video after earning a Bachelor of Arts in Translation and Interpreting from Turkey’s Bogazici University. She earned a Master of Fine Arts in filmmaking from Ohio University and has written and directed several short film and video projects including Fresh Start (2017), Cultivation (2016) and Comfortable (2013). Her work has been featured in several exhibitions and film festivals including Istanbul International Short Film Festival in Turkey; Ohio Short Film and Video Showcase; INVIDEO, an annual international video art festival in Milan, Italy; and Exhibition 280, a national juried exhibition hosted in the Huntington Museum of Art in West Virginia.

Workflow Coordinator Dave Tarbert is an Emmy Award-winning and 8-time Telly Award-winning producer/director/cinematographer/editor/talent who began his television broadcasting career as Special Projects Editor for NewsChannel 5. In front of the camera, Dave was their Man on Music, the first feature reporter covering exclusively music and entertainment for a major-market TV station. As Executive Producer of his new-media production company, Tarbert Television, Dave has created acclaimed digital video content for RTA, Moen, Cleveland Clinic and many other public and private institutions looking to inspire and inform. He loves sharing his passion for the medium of visual arts as a true expression of individual creativity and expressive artistic freedom via cinematic storytelling.

Tiffany Alexander has a BA from Hampton University, and a recent MFA in Narrative Media Writing from the University of Georgia.  She has worked as a Copy Editor at the Orlando Sentinel, Reporter and Assistant Metropolitan Editor for the Plain Dealer, Adjunct Professor at Metro State University in Denver, Assistant City Editor at the Denver Post, as an Editor at CNN Digital, and as an Adjunct Professor at Kent State. Outside of her journalistic past she has written children’s books and TV Pilots.

John Ban brings 40+ years of professional TV, broadcasting and cable experience to the classroom, where he teaches media production and post production. Ban’s work has been recognized for local Emmy, Addy, Telly, Nacaa, Itva, Oiff and W.E.B awards of excellence. He earned a Bachelor of Science in Telecommunications from Kent State University and a Master of Education in Curriculum and Instruction from Cleveland State University.

Allan Byrne has 25 years of experience in acting, directing, and teaching. Allan’s recent roles include Lucky in Waiting for Godot at the Beck Center, Ames in Ages Of The Moon at Ensemble Theatre, and Max in Dobama’s production of Superior Donuts. He performed for two seasons in CPT/Playhouse Square’s The Santaland Diaries as Crumpet. He was one of early members of Charenton Theatre where he appeared in True West, Glengarry Glen Ross, The Caretaker, and Oleanna. Other local productions include: The Exonerated and The Laramie Project for Dobama, Broken Glass and Awake and Sing for the Halle Theatre, Teddy in Pinter’s The Homecoming for Ensemble, and Much Ado About Nothing, Twelfth Night Henry IV and The Foreigner for Porthouse Theatre. He has performed with The Cleveland Playhouse (resident company for three seasons), Great Lakes Theatre Festival, Stage West (where he did Suzuki training and was Polonius in Hamlet), Yale Repertory Theatre and Pittsburgh Public Theatre. Film work includes General Wolfe in the PBS film The War That Made America. He has been honored with a Community Partnership for Arts and Culture Fellowship for his work as a director with productions of Richard III, The Trojan Women, Twelfth Night, and The Birthday Party. He is a certified Meisner Acting teacher and teaches this method at Cleveland State University where he also teaches Eastern Movement/Voice Training, Film, and Directing. CSU directing credits include Marat/Sade, The Oresteia, The Tempest (four American College Theatre Festival certificates), Equus, and Lysistrata.

Salvatore Cardoni earned his first screenplay credit for 2008's Gnomes and Trolls: The Forest Trials, a children's animated feature that was sold to more than 80 countries and played at a dozen film festivals worldwide. He also co-wrote the 2015 award-winning documentary, Traficant: The Congressman from Crimetown. As a professional story analyst, Cardoni has "covered" more than 7,500 screenplays since 2003 for companies like ICM, United Artists and Participant Media. He holds a Master of Fine Arts in Screenwriting from Loyola Marymount University.

James Denny has been teaching film history and analysis courses at Cleveland State University since 2006. He earned his Master of Arts in Applied Communication Theory and Methodology from CSU, writing on the difference between black-and-white and color film footage in terms of the effects on audience emotion. James has co-authored various papers on film and television including those exploring character movement in film, the effects of the laugh track in sitcoms, the parallel history of film and video games, and the effects of modern 3-D movies on the audience.

A native of Akron, Ohio, Joe Fortunato began his entertainment career as a research assistant on NBC’s TODAY show in the summer of 1988. After graduating from Yale University the following year, he came to Los Angeles and worked at ABC in Children’s & Family Programs where he oversaw the highly rated Bugs Bunny and Tweety Show. Joe then spent the next five years developing movies for television, starting at NBC and then as head of development at Steve Krantz Productions. From there, Joe joined the Creative Affairs team at Shukovsky English Entertainment (SEE) to help develop primetime series for the company. At SEE, he was involved with such comedies as The Louie Show, Ink, Murphy Brown and the CBS pilot Lawyers. While working closely with seasoned comedy writers, Joe became interested in pursuing a writing career of his own. He partnered with writer James Koonce, and together they spent a season as Staff Writers for the FOX comedy Living in Captivity under the tutelage of Murphy Brown creator Diane English. From there, the pair wrote several TV pilots and a feature film, Nowhere Man, which was being developed at Disney. Joe then transitioned away from the daily Hollywood grind and pursued another passion – teaching. Taking his hard-won knowledge and expertise from the entertainment industry, he has developed film, media & screenwriting classes for secondary school students in Los Angeles and Arizona and has been a full time Principal Lecturer with the Sidney Poitier New American Film School at Arizona State University for over 12 years. In addition to being on the faculty, Joe is currently pursuing a PhD in Journalism and Mass Communication at ASU. He is also the creator of "Fortunato Film School" a popular program where he hosts screenings of classic films with live commentary for cinema enthusiasts all around the country.

Jennifer Poland has her BA from Kent State and her MA from CSU. She has taught film for the Center for Arts Inspired Learning and the Cleveland High School for Digital Arts, and for CSU. She has worked as producer, director, writer, cinematographer and/or editor on dozens of freelance projects and music videos particularly for Invasion Films and North Coast Films in Cleveland. Her films have been screened at the Houston Comedy Film Festival, Barebones International Film Festival, Austin Spotlight Film Festival, and the University Film Video Association Conference.

Eric Siler has produced and directed numerous television programs in New York, Philadelphia and Cleveland. He has taught film and video production, editing, studio directing, and African film at John Carroll University, Rowan College and the famed Philadelphia High School for the Creative and Performing Arts. Siler earned a Bachelor of Arts in Communications from Elizabethtown College, a Master of Fine Arts in Television Production from Brooklyn College and his Master of Education in English/Communication from Cabrini College.

Cleveland native Michael Suglio is the creator and director of the “Short. Sweet. Film Fest.” Suglio earned a Master of Business Administration from Case Western Reserve University’s Weatherhead School of Management. He has produced and directed a feature film and several short films and music videos, and he serves on the Board of Directors of Independent Pictures, which hosts the Ohio Independent Film Festival.

With more than 25 years of experience in the entertainment industry, John Vourlis holds a Master of Fine Arts in Film Production from the University of Southern California’s School of Cinematic Arts. Vourlis was nominated for best director for his short film Rocket from the Grave at the 2013 Ohio Independent Film Festival. He most recently produced and directed Breaking Balls, a documentary about the game of bocce, which was an Official Selection of the 2017 Cleveland International Film Festival and the 2017 Chagrin Documentary Film Festival.

School of Film & Media Arts - In the News