'All Rise' Fest a CSU Explores Intersection of Law, Film 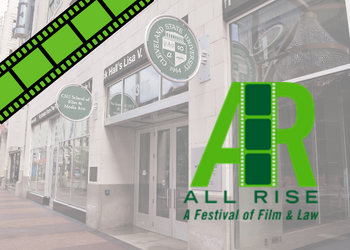 The festival is made possible through the generous support of Lee and Ageleke Zapis.

The festival launches on Thursday at Westfield Studio Theater, with a keynote event featuring Angela Russo-Otstot, screenwriter, producer and actor best known for her work in the films “Cherry” and “Captain America: The Winter Soldier.” The president of Greater Cleveland Film Commission, Bill Garvey, will lead the discussion about the power of storytelling and the creative process.

On Friday, screenings and panels will continue, along with screenings of the films “Finding Kendrick Johnson,” a heartbreaking documentary about an unsolved murder, and “The First Step,” which documents political pundit Van Jones as he pushes for landmark criminal justice reform in an extremely polarized American political landscape. “First Step” director Brandon Kramer will join the audience for a discussion after the screening.

The festival closes on Saturday with feature two films—“The Pez Outlaw,” a highly-entertaining documentary recounting of a Midwestern smuggling Eastern Europe’s rarest Pez dispensers to the United States after the fall of the Berlin Wall; and “Dark Waters,” the true story of Cincinnati lawyer Robert Bilott (played by Mark Ruffalo) who risks career, health and family to take on one of the world’s largest chemical companies.

“Dark Waters” will be followed with a conversation about law and environmental justice between Bilott and Lee Fisher, Dean of Cleveland-Marshall College of Law at CSU.

All Rise: A Festival of Film & Law intends to bring together audiences through compelling conversations celebrating cinema and law. For more information and a schedule of events, visit www.allrisefilmfest.org.