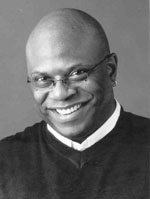 Bandleader, drummer, and percussionist Bill Ransom is a musical chameleon - equally at home with classical, jazz, R&B, and rock. With a style described as “physical, stirring, demanding, rare and personal,” Bill has toured and recorded with leading artists including Patrice Rushen, Beth Hart, Marion Meadows, Cecil Bridgewater, Diane Reeves, Mary Wilson, and James Newton. He spent much of the ’90s on the road with contemporary saxophonist Najee and R&B crooner Gerald LeVert and was featured percussionist on Mr. LeVert’s solo debut, “Private Line.” Bill has appeared in a number of theatrical productions including “Love, Janis”, under the musical direction of Big Brother & the Holding Company’s Sam Andrew who noted, “¼When Bill Ransom plays the drums he looks as if he is made of rubber and he makes every time special because he acts it out.”

For the past several years Bill has directed “Jazz Meets Hip Hop” for the Tri-C JazzFest in Cleveland, Ohio, and is a consultant to both the Shaker Heights school system and Cleveland Music School Settlement. His debut CD, Generations, was released nationwide in November 2005 on Bongo Time Records.