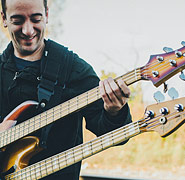 One of the most versatile and sought after electric and double bassists in the Cleveland area, Alfredo Guerrieri has played with an impressive array of musicians throughout his career.  He has recorded and performed with Tony Award nominee Mary Bridget Davies, Grammy Award winner Heather Headley, Tony Pullizzi, Joe McBride, Dan Wilson, Keith McKelley, and The Speedbumps. He has toured nationally and performed internationally at the Bermuda Music Festival and One World Festival in Perth, Australia.

Alfredo has also appeared in a number of theater productions at Playhouse Square and Baldwin Wallace College such as Five Guys Named Moe, Mamma Mia, Freaky Friday, and Anything Goes.

Alfredo has earned degrees from Musician’s Institute in Bass Performance, Bachelors in Music Business from Berklee College of Music, and a Masters in Jazz Studies at Cleveland State University.