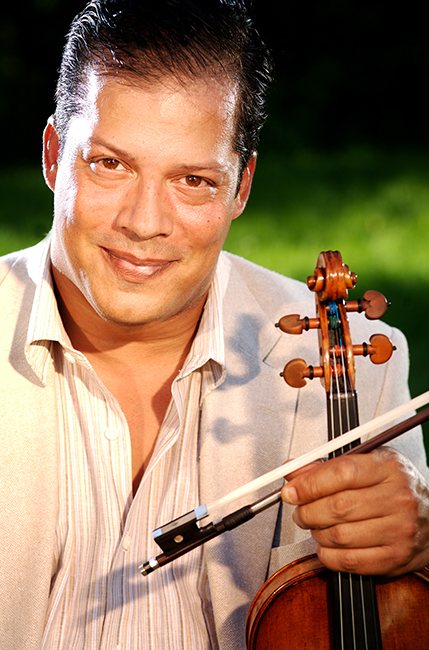 Since his critically acclaimed Lincoln Center debut in 1993, the American violinist Odin Rathnam has established himself as one of the most passionate and versatile artists of his generation. He has received unanimous praise from critics and audiences for his “captivating temperament,” “brilliant technique” and a sound “recalling the legendary violinists of the past”. A veteran performer at many major European and American festivals including the Algarve International Music Festival in Portugal, Denmark’s Tivoli and Vendsyssel Festivals, Deia International Festival in Mallorca, Boswil Festival in Switzerland, Aspen, Caramoor and Endless Mountain Music Festivals, he has also appeared in recital on the Market Square Concerts series, Lincoln Center’s Alice Tully Hall and Carnegie Recital Hall, where he first appeared at the age of 15.

As a soloist, Odin Rathnam has performed with the Baltimore Chamber Orchestra, the Philippine Philharmonic, the Colombian National Symphony, the Harrisburg Symphony, Philadelphia Virtuosi, the Lancaster Symphony, the York Symphony, the EMMF Orchestra, The New Amsterdam Symphony , the San Juan Symphony Orchestra, Randers Chamber Orchestra, among others. During his distinguished career of more than 30 years, he has enjoyed the fortune of collaborating as a guest soloist, concertmaster and leader with many distinguished conductors, including Sergiu Commissiona , Pinchas Zukerman, JoAnnFalletta, Stephen Gunzenhauser, Olivier Ochanine, Lawrence Golan, Arthur Post, Stuart Malina, Daniel Spalding and many more, appearing in the United States, Canada, Europe and the Far East.

Recent performances include concerti of Brahms , Mendelssohn, Korngold, Vivaldi, Piazzolla and Bruch, a performance of Sarasate “ Zigeunerweisen” with the Hershey Symphony at Lincoln Center’s Alice Tully Hall as well as recitals in the United States and Portugal. In 2007, he made his Tivoli Festival debut playing Prokofiev Sonata for Two Violins with Nikolai Znaider. The Danish newspaper, Kristelig Dagblad, hailed the “outstanding, full-blooded romantic violin playing by both players.” Four years later, he made his Danish orchestral debut, playing and conducting Vivaldi’s Four Seasons and Piazzolla’s Four Seasons of Buenos Aires, with the Randers Chamber Orchestra.

Upcoming performances include a three concert series in the Mid State of Pennsylvania, presenting the complete Sonatas and Partitas of J.S. Bach, as well as works by Paganini, Ysaye , Kreisler and Piazzola, a regional tour of violin and piano recitals with works by Strauss, Stravinsky, Chausson and Sarasate and orchestral solo appearances featuring works by Bruch, Bach and Sarasate.

Mr. Rathnam ‘s commitment to the development of young talents has led many of his students to be accepted at major conservatories throughout the United States and abroad, several going on to win prizes in national and international competitions, including the Fischoff, Nielsen and Queen Elizabeth competitions. He has served as a performing faculty member at Anker Buch’s Danish Summer School for Strings on the island of Mors, Danish Strings, and the Nordic Music Academy led by Nikolai Znaider . In 2012, Mr. Rathnam accepted an appointment as artistic director of the Academia de Verao in Lagos, Portugal. He then established the Silkeborg Classic Academy, with Danish conductor, Christian Horbov-Meier , which takes place annually in Denmark. In 2013, Mr. Rathnam was invited to give his lecture /masterclass series “ Lost in Translation-Demystifying the Principles of Ivan Galamian in Practical Application” at Juilliard, for the Starling DeLay Symposium, classes he has also presented in Chicago ,Copenhagen, Zambales ( Philippines), Portugal and at the Universities of Penn State, James Madison, New Mexico State University and Fort Lewis College, in Durango, Colorado. In the fall of 2016, Mr. Rathnam accepted a sabbatical post as professor of violin at Penn State University, in State College.

Mr. Rathnam received his formal training at Juilliard Pre-College and Mannes College of Music with Sally Thomas and Ann Setzer, returning to the Juilliard School as a full scholarship student of Dorothy DeLay and Masao Kawasaki. He studied chamber music with Julius Levine, Felix Galimir, Joel Smirnoff, and Josef Gingold. He also worked closely with the Danish violinist and pedagogue Anker Buch , who is credited by many for bringing Ivan Galamian’s teachings to Denmark.

Mr. Rathnam’s recordings can be found on The Helikon, West Branch and Kleos labels, with works by Mendelssohn, Vivaldi, Strauss and Schoenberg.

Odin Rathnam performs on a late 19th century violin crafted by an unknown master, in the manner of Guarnerius Del Gesu’s middle period.